Four Things That I Learned From Bob Blanchard

Digging up topics for the Old Bag is a lot more involved than I ever imagined it would be.  I’ve wanted to put this post together since my last post (back in January).  Comps and story boards use to be the bread and butter for a lot of the Detroit artists.  Even when I was getting out of CCS there was an illustration studio, Colorforms, that drew in a large part of their income from this market.  I took an independent study under Bob Blanchard to help fill my bag with some real world samples.  I’ve had the samples scanned in since January but I was missing some important pieces of this post…

I found one! While studying under Mr. Blanchard, I was also taking The Pursuit of Meaning with Dr. James Brown.  For that class, I wrote a paper titled, “Searching for Creativity.”  The body of that paper was built around interviews I did with Bob.  I actually found my rough draft of this paper and now have some of the body that I wanted for this post.

1)  For most of us, the initial influence and inspiration to become an illustrator starts way before art school.  For Bob it was from books like Treasure Island, and the paintings of N.C.Wyeth and Howard Pyle.  While I studied under him, Bob continued to draw inspiration from the “over all view” of the field of illustration and from the Impressionists.  Bob said, “Each (artist) has his own unique way of looking at life and making pictures, and I appreciate that…”

2) Bob found the concept of “Creativity” to be a misnomer. To him, the creative process and the working process were more mechanical. In his words, “You get an idea, develop the concept, do some roughs, some comps, and then the finish.” He went on to add, “the creative process is nothing more that your understanding of your surrounding areas.” 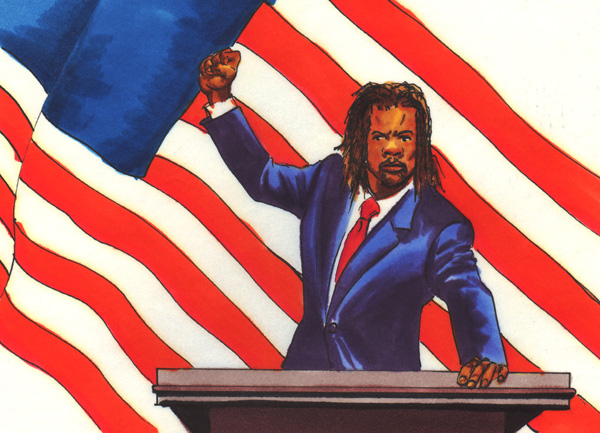 4) The one quote that I most wanted was written in the paper that I couldn’t find. I had asked Bob how he felt illustrators were viewed by society (this was back in 1999 to an illustrator that worked Detroit from the late 50’s up till that point). His answer was that society didn’t see illustrators, that we were (are) invisible.

« The Old Bag » Self Portrait: Using the CF Payne technique

This site uses Akismet to reduce spam. Learn how your comment data is processed.